Japanese Whisky is hot stuff right now. In fact, I learned first-hand during a recent trip to Japan, how hard it is  to get your hands on certain premium whiskies. As I write, distilleries large and small are ramping up production to meet the surging demand and interest in Japanese Whisky.

All this attention can be traced back to the early part of this century when Japanese whisky began earning international acclaim, In February, 2001, Whisky Magazine organized a blind tasting competition, and the Yoichi 10 year Single Cask won the highest honors. Curiously, about the time Japanese whiskies were winning fans at international tastings, the domestic market was in a slump, and most of the distilleries, big or small, were cutting back on production. And this pretty much explains why it’s darn tough to get your hands on a bottle of the 25 year Single Malt Hakushu unless your prepared to tap the equity in your house.

The Fascinating History of Whisky in Japan

While Americans were the first to bring whisky to Japan during during Commodore Perry’s opening of trade, the style and soul of Japanese whisky is positively scottish.

The latter half of the the 19th century in Japan,  known as the Meiji Era, was a time of profound social and economic change. During this period, imported whisky become available in Japan – for those who had the money. After mock versions of whisky using shochu, a locally distilled liquor usually made from sweet potatoes, started selling well, serious attempts were being made to produce a locally distilled whisky.

The father figure of whisky in Japan is a man named Masataka Taketsuru. His fascinating life served as the inspiration for a widely popular television drama in Japan.  Aftering growing up in the family sake business, he earned a degree in chemistry and fermentation, and infuriated his father by taking a job in the rapid growing industrial alcohol industry instead returning to the family business.. As you can imagine, for this time period,  he was pretty much a rebel.

Taketsuru was eventually dispatch by his employer to learn how to make authentic whisky in Scotland. While in Scotland Taketsuru gained an apprenticeship at a distillery, produced a legendary notebook on making scotch and fell in love with a local girl name Rita. They quickly married and returned to Japan to pursue his dream of making whisky. Taketsuru was soon working with Shinjiro Torii of Suntory Whisky, and was instrumental in establishing the first distillery at Yamazaki. He eventually left Suntory to establish is own whisky company, Nikka, in Hokkaido.

A Traveler’s Guide to Japanese Distilleries

One of the main stops on our culinary tour of Japan, Hakushu is located in the pristine mountain wilderness of Yamanishi and  is surrounded by a large nature and wild bird sanctuary. Shinjiro Torii believed this was essential to preserving the environment and quality of water as this is the most important ingredient for good whisky.

Tours are available almost everyday except for major holidays. The distillery has hiking trails within the bird sanctuary, a restaurant with an outdoor patio, tasting bar, gift shop and is also home to the Suntory Museum of Whisky.

Surrounded by mountains and at the intersection of two rivers, Suntory’s Yamazaki distillery is the birthplace of whisky in Japan. It is located between Osaka h4and Kyoto. In 1984 the single malt Yamazaki was released, and the distillery now produces a 12, 18 and 25 year single malt as well as limited releases.

Tours are available and the distillery is known for its library of 7000 bottles of unblended malt whisky on display. 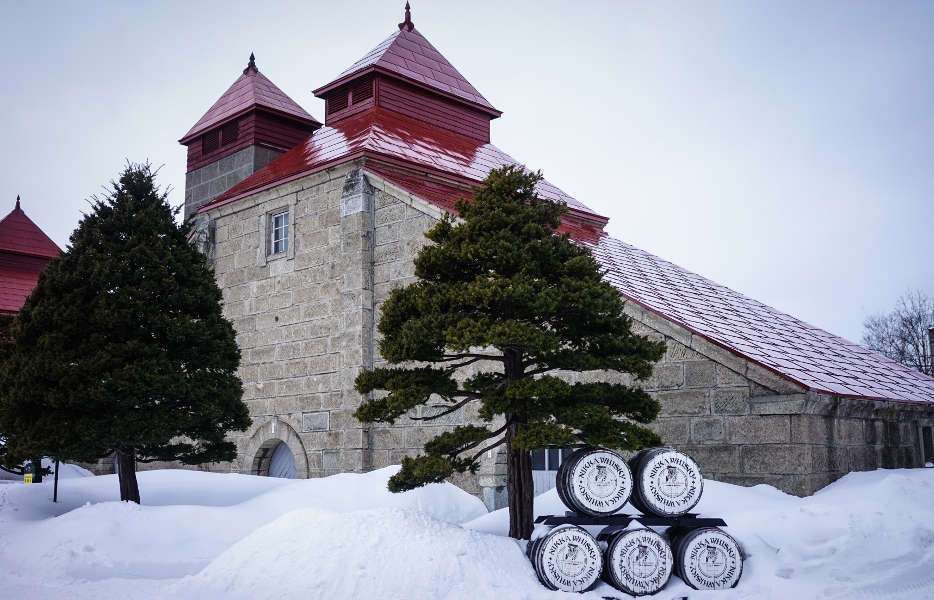 Located on the northern island of Hokkaido at a latitude similar to Toronto Canada, the Yoichi distillery has mountains on three sides and the sea of Japan on the other. Taketsuru was well aware of the difficulty starting  getting a distillery off the ground, so he wisely set up an apple juice operation to keep the company afloat until the whisky was ready to sell.. The company still produces apple juice and apple brandy but at a different location. The distillery resembles a little village and each step of the whisky making process takes place in a separate building.

Guided and self-guided tours are available at the Yoichi distillery.

The highest distillery in Japan is located in Nagano prefecture between the southern and central alps of Japan. This location was chosen for its cool temperatures, slow maturation and soft water.  Tax reforms on malt and a slump in demand hit the distillery hard in the early 90’s and production was paused for nearly 19 years. However, the pot stills were dusted off in 2010 and the company is now producing smooth and elegant whiskies. Thirty minute tours are available.

How to Drink & Taste Whisky

Like wine, tasting whisky starts with a look at the color and the aromas of its nose. You can drink whisky straight, but adding some water will open up the whisky and reveal some of the more intricate flavors such as caramel, wood, smoke, dried fruit, and spice. Most whisky in Japan is consumed with just ice, as a combination of whisky and soda water known as a highball or with a little water and ice ( mizuwari).

Start Planning Your Trip To Japan